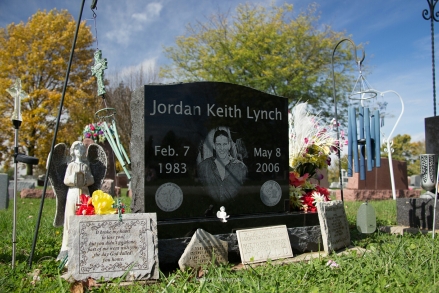 Today it arrived, 8 years 5 months & 5 days. I guess I always assumed that the headstone would make it hurt more. Finalize things. The truth of it though, it brought some much needed, long overdue peace.
I’m not sure how to explain it in words. I never questioned when his parents would have it or what would be on it. The realization of it all came on my birthday. Then I was shown the rough draft and cried. Cried because of the meaning. The existence behind something that had been missing.
Momma Lynch text me today saying it had arrived, and with the text she sent pictures. I cried. I couldn’t breathe. Not from sadness but from the overwhelming feeling of comfort. Obviously I finished what I was in the middle of doing and headed to the cemetery. It was more beautiful in person. Artistically amazing, just as he was. The two circles on the bottom corners are medals that his family was given after donating to save others. ❤ The back, among other items, holds two beautiful pieces left longer than any life or memory. The top left corner holds my exact turtle tattoo. His mom says when he left he took a part of me. The bottom right corner says 'Love, Jordan', my most favorite thing ever. It's traced so it's his handwriting. Signed almost to insinuate this is the end.
His parents and brother did an amazing job putting something together that no family should have to do for a child or younger sibling.
I love you guys to the moon & back and I'm more than certain he wouldn't change a thing on it if given the opportunity.
40,000 Americans die yearly by suicide, making it the 10th leading cause of death. Every 13.3 seconds someone takes their own life, leaving those who love them to live in a whirlwind of confusion, depression and a life without closure.

Not sure why, but when things get hard, really really hard, I go here. The cemetery. Jordan was buried here 8 years ago. I wouldn’t say I ‘feel’ him here so I’m not sure why this is where I run. Its peaceful, quiet & soothing. After he first passed I would spend almost every night out here.  A few times I feel asleep, crying for him.  Willing to give anything to have him back.
Today was a very hard day. Flooded with emotions & tears. Mostly because I miss him & his loyalty. His friendship & his love. His security. Feeling broken, leaving my heart buried.

I love this road. The secluded location of it is comforting. Its not a named road, rather a numbered road followed with a direction, east or west. It winds just as curvy as the creek its paved next to. An old private cemetery sits atop a hill with a single tree that watches the sun set on the back of the headstones.

Locked. Guarded. Secure.
I’ve never noticed this place. I think its funny how we notice things only when were ready. I’ve driven by here countless times, apparently not ready until now to see such beauty. As I walked up the lane I had a sense of violation. Not because it was illegal to be there but I felt as if I was violating privacy of someone. An odd feeling I’ve never experienced in a cemetery.

New life and very old death right next to each other. I remember writing about graveyards and how easily people are forgotten. Never to be remembered. I do still believe this. But we are never destroyed. We are never obliterated. I forget where I read this or found out about this idea, but when we die, our bodies decompose. We return to the earth and the universe. We break down into the elements that made us. Those elements cannot be destroyed. Matter cannot be destroyed. It is just reused. So the stuff that made us, goes onto to make other things. We live in on in the world around us. Our bodies contribute in the creation of new things. They live on forever. So in a sense we really are immortal. And think about all those that died before us. Think of how they all died and broke down and were made into new things, new creatures, new people. We may have forgotten their names and what they did, but they are not gone, not completely and they never will be.

Fog delay: Yesterday’s post. Shot this at 3am on my way home from work (I’m a bartender) I’m sure many people interacted with last night are feeling a little foggy. I’ve always loved the fog. It gives a sense of … Continue reading →