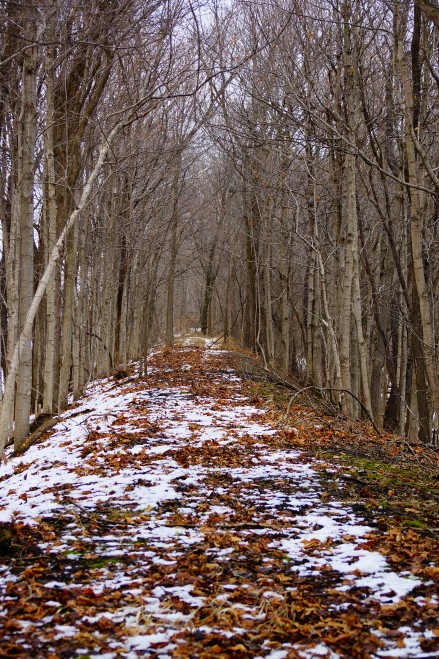 Indiana is called the Crossroads of America. Highways and railways cut through the state and can be found everywhere. Railways have declined over the years and now that state is left with this. Tall embankments where railroads once were. Now they are paths through woods with the occasional reminder that machines once passed through. Railroad ties, bits of coal, markers, broken up bridges, even graves, all mark these forgotten railways.

It has been kind of fun looking through my old photos as I begin to wrap up this project. I found this one tonight and I think this particular house has shown up before in these posts. But the house is a favorite and if you ask why, I wouldn’t be able to tell you. I think it might be the location of it, as it’s on a favorite road of mine and the area is pretty. I have never been in this house and it holds a certain mystery to it. I don’t know if I’ll ever go inside it, but the place is pretty and it will always be a favorite.

Along one of the roads that I have traveled on too many times to count is the tiny little village of Milledgeville. There really isn’t much of anything there except from a few houses, a church and the old grocery and gas station, which is no longer open. But the building seems to have been frozen in time. A little piece of the past. One of the gas pumps even has the last fill up and price still on it.

This is the schoolhouse that where the previous photo was taken and where my camera died. It really is an awesome building, though it is kind of creepy. We were’t able to get into it but the grounds still made for some good photos. There were a couple other small buildings on the property and an old playground. Hopefully we will be able to get into the building one day and hopefully I won’t lose another camera to the place.

While I am not sure of the exact date, it was around this time last year that my camera broke. I was out shooting at an abandoned schoolhouse with Brandy one day when it happened. We were walking around the property, which was creepy, taking photos when we saw this car and the garage. As we walked towards it, everything was very still and we felt a really cold spot. It was very eerie and weird. I took this photo and then my camera just shut down, mid shot. I thought it was the battery that had died. I was mad because there were other things I wanted to get photos of. And the battery was not close to being dead. I put my other battery in and it still didn’t work. Come to find out the camera just died. Completely broken. This was the last photo I ever took with it. I’m not sure what exactly made it break, but maybe it was something there at that schoolhouse. Anyway, I was certainly not happy with the situation and eventually I got the camera that I have now.

This place was a location in a not so good neighborhood that I had driven past a few times and wanted to get into so badly. But I didn’t want to get into it by myself. Me and Hannah had an assignment this weekend to pick a photographer and emulate their style. She wanted to do industrial photos and this place came into mind. So we hooked up with Brandy and KC and headed towards it. We couldn’t directly get to it. So we parked a ways away at a warehouse and walked along some train tracks, over a rickety trestle bridge, found a hole in the fence that surrounded the place and climbed through. This place was incredible. I’m pretty certain it is an abandoned coke factory and it looks like it has been around for quite a while. A lot of the buildings were very old brick buildings. We spent the evening here shooting the whole place. I think we all got some sick shots and then we headed out just before sunset. None of us wanted to be in there at night. I doubt this will be the last time we’ll visit this place. One thing I know for sure is that we went over and beyond to get industrial photos and our professor better be pleased with them.

One of my favorite abandoned houses and I’ve never stepped foot in it. There are no “No Trespassing” signs or boarded up doors holding me back. It would be easy for me to get in. I’ve explored so many other houses. But not this one. I don’t fully know why. But maybe it’s because I like not knowing what secrets it contains. I like being able to imagine what it’s like in there.