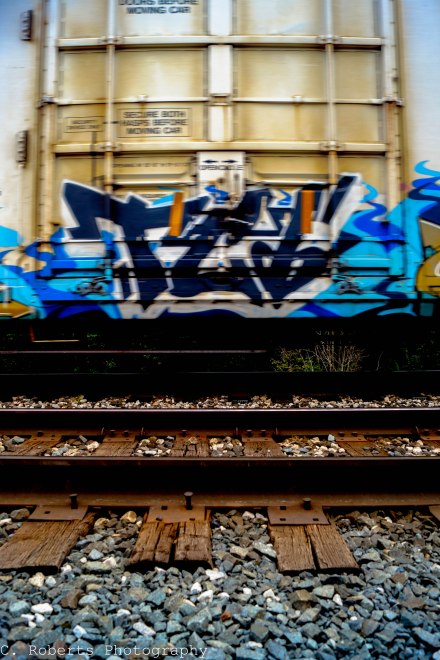 Today was a boring day. I drove all over the place and visited a lot of places and blew through a lot of gas, but for some reason it bored me. Usually I like wandering, but not today. I was alone and didn’t want to be. I was bored and tired and the heat was annoying. So I spent the afternoon sitting on the tracks watching trains colored with graffiti go by.

Today was a great day. It started out in a Waffle House early this morning in Pendleton. Me, Hannah, Brandy, Nick and Mary met up there and had breakfast. From there we headed to Gary. We were running on about two hours of sleep but we weren’t going to let that slow us down. We were driving all the way to Gary to shoot some abandoned buildings there. We started with an abandoned train station. The building was great, but very eerie. It was filled with graffiti and fliers of missing people. One bit of graffiti that kept reoccurring was “The Rest Are Dead” in red paint on the walls. There was also this very dark hallway that none of us really wanted to go in. That is where the picture above was taken. After walking on the railroad and watching several trains go by, we moved on to the next building. That building  was an old church. We explored this large building for quite some time as there were several levels and a basement. It was perfect for shooting. Then we moved onto an abandoned theater, which was slightly terrifying. For some reason everyone got a weird vibe from the heavily decayed building. We got a few shots there and then quickly moved on to an old school building. A few shots there and then we wrapped up the trip by driving by a house that had apparently contained demons and the family that lived there was possessed at one time.  It was a great road trip. We got some great shots, had a lot of fun, saw some very creepy things, and made it out of Gary in one piece.

When I took this shot, I was out driving around in the country on my way to Danville.  I hadn’t ever gone this way and I was having fun taking shots of snow. And then I happened upon this stop sign. And I came to a full stop (for once) and sat there looking at. I had to get a picture. I guess I like this so much because it was so random and I could have easily missed it. But I didn’t. It’s so simple but I like the message. Just don’t stop believing. It doesn’t say a specific thing. Just keep believing. Believe in something. Find something or someone and hold onto it and never let go. Find that one thing you can believe in and hold onto it, no matter what.