This photo reminds me of my cross country road trip.  The endless open, like the ocean.  The quiet thoughts while driving during sunset.  I enjoyed being on the road.  I had more of a feeling of ‘having everything’ than I do now. Going from place to place, no agenda, no destination.  Some days I’d give anything to be out there again.  Truly living life in such a way of simplicity. 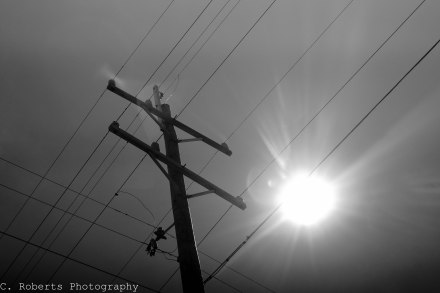 I do a lot of driving and right now the weather is perfect for having the windows rolled down and the sun roof open. It’s one of my favorite things to have everything open as I drive down the road.  Usually the photos are shot through the windows or through the front window. But every now and the you look up and a shot presents itself. Now I have been told not to shoot while driving, by a few people. But sometimes the shots are just too good and I try to be as safe as possible when I shoot. I will have you know that I learned this technique from the best 😉

Mirrors are lovely things. And I am sure I have talked about them before or at least alluded to them. And this particular mirror and this particular model have shown up before. I like mirrors. They allows us to see ourselves. This is pretty obvious, but they really do allows us to look at ourselves from the outside. A glimpse at ourselves from another perspective. Sometimes good, sometimes bad. But the picture isn’t perfect. We see flaws that others never notice. We look at ourselves and are harsh. But we should remember that it is a reflection, an image, and it can be distorted, blurred, flawed and not fully true.

Shooting tonight was a lot of fun.  I got to spend some much needed time with Alicia, whom I had no clue how much alike we really are.   Talking with her made me realize just how much my head really was spinning.  It’s pretty cool being able to stand in the middle of a road under a full moon & a sky full of stars, feeling the fall air chill your skin.  The only way to get out of the confined space my thoughts are fighting through, is to carefully wade through the content.

Shot at Brockway Glass Company in Lapel IN, painted on a manhole.

The truest visual of the country side. I love it!! Mary, Cooper & I were out for a drive to Muncie, on our way back we took only country roads. Found this little gem. The country image.

I love drawing. I’ve done it for as long as I can remember. I think I’m decent at it. It can be challenging at times but it’s fun. It’s fun to create something or to recreate something. To test your skill or just be creative. The lines are faint in this drawing as I continue to work on it. It’s unfinished but it’s slowly unfolding into a more substantial image. 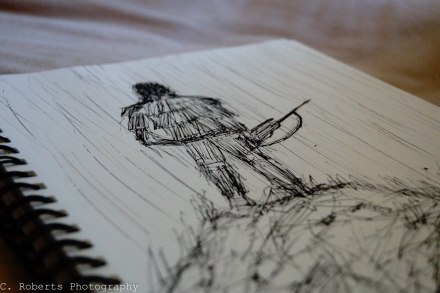 Every now and then I will have scenes, ideas or images pop up in my mind. A lot of times they just pass or they really aren’t worth putting effort into developing. And then there are others that I really want to make a reality or they refuse to be ignored. Today for the first time I had a story idea and image come up together. They went hand in hand. So I sketched out the image in my head and started writing. I didn’t work for very long but it was nice to be doing something creative like that again. I never have time for stuff like this anymore. So being able to just draw and write was very nice tonight.

I caught another train today. I was taking a different way home and noticed the tracks so I thought I’d drive by them and see if anything was picture worthy. And as I pulled up to the tracks, I saw it coming and had to stop. So I waited and got my shots. The driver blew the horn a few extra times and waved as he went on his way. It isn’t the most special shot and it doesn’t hold some deep meaning, but it made me smile and it made my day.

Abandoned doors. Doors leading into another abandoned building. Doors that hold more secrets, more stories, more memories that will never be know. Old and forgotten doors. Left behind, slowly decaying and being overtaken by nature. I think they were part of what was an old schoolhouse. Most of the building was overgrown and decayed. What once was home to people now shelters animals and supports plants that are slowly overtaking it.