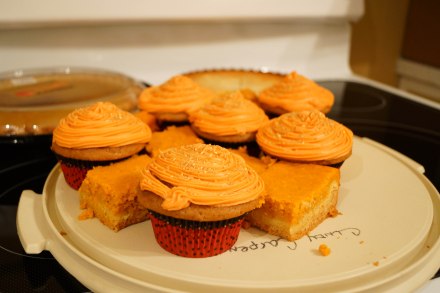 Today was kind of a weird day. It was Thanksgiving and my dad’s birthday. It was also the first year that I have celebrated it with my girlfriend and her family, which was very nice. It was also the same year that mom did not cook a proper Thanksgiving dinner, because she had just moved. I actually was unable to have dinner with her. We had dessert instead. It was unusual and the traditions weren’t kept and things felt out of place. But things change and we must change with them.

So I know this photo probably makes zero sense to those of you who are actually still around and still reading this. I have gotten far behind on posts and I have to be honest, I have not been taking photos every day like I should. That being said it has been incredibly busy lately with school, work, and trying to help Mom move to a new house. But I promise I will do better and I will finish this challenge. Some of the posts will be using old photos. But back to this photo, which is a year old, out of place and not my best. When I saw this photo tonight it meant a lot to me. This tree was a little pine tree that me and Abbie bought for Mom on Mother’s day for the house, because she so badly wanted a pine tree. One day it would get big enough to decorate. Well, it is still little but that year she decorated it and it looked really pretty, though small, out in the yard covered in snow. This tree made the house even more of a home. Today we moved out of that house, or at least started to, and moved elsewhere. And it was kinda hard. That place was our home for some six years or so. It was beautiful and it was full of so many memories, like this little tree. And it was not easy packing things up and moving out. But nothing is permanent in this life and things change. We move on and hold the memories of past homes with us. And this home was a great one.

Today I was able to go home and see my mom. It was nice to be back, but also kind of sad. Our house is officially sold and she will be moving soon. I know I am away most of the time, but that house was home and it was hard to see things being packed up. I had to pack up part of my room also and it was weird. It is hard saying good bye to a place that has been home for years and where so many memories have taken place. The entire area holds memories. The fields, woods, and roads are home too. As we drove back from the new house where she will be moving we saw this burned up combine. It was a prototype that obviously failed quite badly. It was an interesting sight to see. And I sit here and try to form some profound connection between home and a burned combine and I can’t. This photo is just another photo of what I call home and what soon will not be home.

I moved back to Marian today. It was a long day of moving, getting myself and Hannah settled in our new rooms. I’m in good old Clare Hall again, just with a new room and roommate this year. I do have to say my room is much better than last semester. It’s a good start to a hopefully good semester. It does feel good to be back at Marian.

Today I spent most of the day packing with Hannah and getting ready to head back to Marian. Though it’s tedious and annoying to pack, I’m looking forward to moving back. I think it’s going to be a good semester, a lot better than last semester.

Jesse, ‘Storm’, Jason & Ben. I love these boys! Most wouldn’t, but I consider myself lucky to call them mine. These boys have been friends for years through school, girlfriends, drunken nights, roommates & many Vegas trips. Ben and his wife are leaving for the UK for some time, allowing Ben to continue his schooling.
Having friends deeply rooted as these boys makes for a lifetime of memories, laughter, tears & good freakin’ times, however it makes goodbyes difficult.
We will be holdin’ it down here in The States upon your return & we wish you kids the best of luck!!

Last week I finished up finals and completed my freshman year of college. It was a pretty good year with lots of ups and downs, great memories, adventures, and meeting the most amazing woman ever. Once I finished up my finals, I moved out and moved to my Dad’s house. It was a little weird moving to his house. I haven’t actually lived there in about seven years. I moved out when my parents got divorced and lived with my mom. But this summer I decided to live with my dad, just to switch it up. And tonight I unpacked and put my room together. It’s interesting being back in this room. This was my room when I was a little kid and it’s changed a lot.