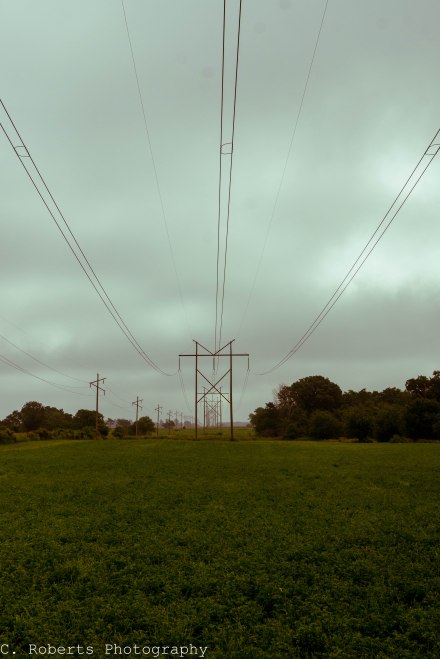 These big power lines run right next to one of my favorite abandoned houses. They cut right through the fields. I’ve shot them before. They make an interesting shot. They’ve always looked like giants to me. Tall wooden or steel giants holding the lines that feed the electric world we live in. There they stand, always on duty, braving whatever Indiana has to throw at them. Tall, silent and brave.

I headed to work earlier today and because I wasn’t driving around in a rush, I was noticed some train tracks around the buildings close to my work. So I drove down a side road and decided to shoot these abandoned tracks. As I went to take a shot, my battery died. So I dug around in my bag for another battery and replaced it. Then I went to take the shot again, and there was no memory card. So I dug for a memory card and put it in. Again, I went for the shot and the memory card was full. So I cleared the card and went to take the shot. Then it informed me the memory card was locked. So I took it out and I thought I unlocked, but it took me three or four more tries to get it unlocked. And finally I got this shot, after a lot of frustration and swearing. . And next time, I will be better prepared.